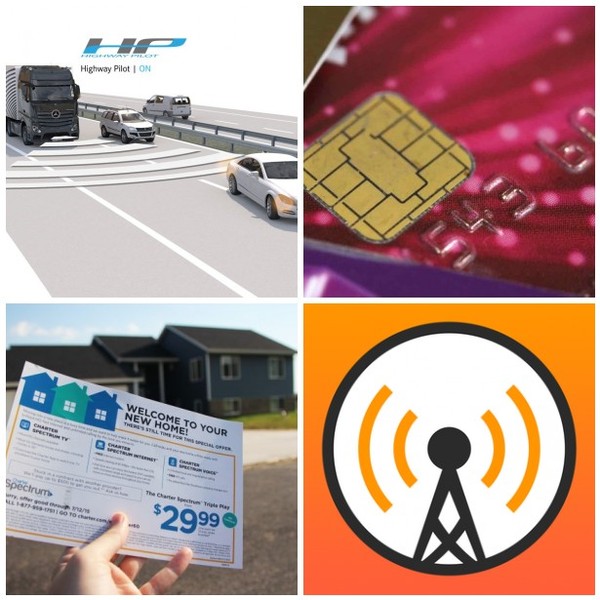 Have you wondered about those gold tabs on your latest credit card, or maybe where all the aliens are? How about whether Software Engineers keep you in mind when they develop your apps? Covering the Geeky News and touching on some ethics on this episode of GeekSpeak

Daimler’s dreams of self-driving big rig trucks just took one step closer to reality. The automaker has conducted the first-ever test of its semi-autonomous Highway Pilot system in a production truck on a public road, driving an augmented Mercedes-Benz Actros down Germany’s Autobahn 8. While the vehicle needed a crew to keep watch, it could steer itself down the highway using a combination of radar, a stereo camera array and off-the-shelf systems like adaptive cruise control. The dry run shows that the technology can work on just about any vehicle in the real world, not just one-off concepts.

Edward Joseph Snowden is an American computer professional, former CIA employee, and former government contractor who leaked classified information from the U.S. National Security Agency (NSA) in 2013. The information revealed numerous global surveillance programs, many run by the NSA and the Five Eyes with the cooperation of telecommunication companies and European governments."

Edward Snowden has come up with a solution to the Fermi Paradox that I hadn’t heard of before. Maybe we haven’t discovered intelligent life elsewhere in the Universe, says Snowden, because their communications encryption is indistinguishable from cosmic background radiation.

Last week, Wet Martians Teach Their Cars to Program, we spoke about Andromeda and said that it was the closest galaxy.

Listener Phil [DuiTchLeh] from Hartnell College and Salinas High wrote in to say:

Andromeda is not our closest galaxy. It’s just the most distant thing can be seen with human unaided eyes. The Large and Small Magellanic Clouds are closer and visually brighter, but only viewed from the Southern Hemisphere. Altogether, there are about two dozen galaxies closer to us than Andromeda. Andromeda is the only one that can be seen without a telescope from the Northern Hemisphere. -Shine on, Phil Deutschle

My colleague asked a panel of Google engineers and product managers to describe how they juggle ethical dilemmas encountered during product development. Their answer was that Google did not have a designated ethicist, but instead relies on each individual engineer to make ethical decisions.

Amazon to cease sale of Apple TV and Chromecast

As of 29 October, shoppers will no longer be able to buy Apple TV or Chromecast devices from Amazon. Citing compatibility issues with Prime Video, Amazon emailed marketplace sellers to inform them it is not accepting new listings for the two media devices, and any existing listings will be removed at the end of October.

Man builds house, then finds out cable Internet will cost $117,000

Marshall says he received assurances from Charter, the local cable company, that he could get Internet access to his home in Wisconsin. There was also a promise of relatively fast DSL, with telco Frontier Communications telling him it could provide 24Mbps download speeds, he told Ars.

As it turned out, neither company could deliver. Once the house was built, Charter would only offer service if he paid $117,000 to cover the cost of extending its network to his new home. Frontier does provide DSL Internet, but only at slower speeds of up to 3Mbps downstream and 1Mbps upstream.

Marco Arment on why he pulled down Peace

Marco speaks about the importance of keeping podcasting open.

Capturing Light on Film at MIT

A new camera developed at MIT can photograph a trillion frames per second. Compare that with a traditional movie camera which takes a mere 24. This new advancement in photographic technology has given scientists the ability to photograph the movement of the fastest thing in the Universe, light.

This week I moved our podcast away from NPR. So now we are serving it directly. When I did that I was able to move to a stereo audio file. This show is the first time we are doing stereo – slight pan-left for the host and right for Miles and me, we were sharing a mic.

Now we are covering our own bandwidth. Wanna help? Contact us.