Chefs Smuggle Updates off your Roof 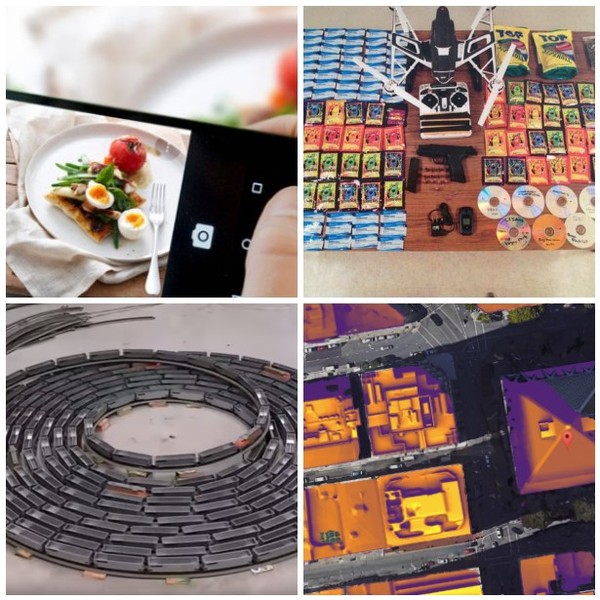 Open Source Pixar stuff, the need for consumer vigilance; drones used to smuggle into prison; analog vs UI geekery; developments that affect energy use; and opposing suggestions for what you do with your food photographs. With Lyle, Brian and Bonnie.

Verizon is reportedly issuing a $1,500 refund to a customer who recently discovered that she’d been paying every month for a long-canceled landline. Lauraine Hollyer of Glen Ridge, New Jersey, says she canceled her family’s second landline around the year 2000, according to a story today at NJ.com. For a long time, she was not billed for that second line, but the charges apparently re-appeared about five years ago without her realizing it.

According to Robert Thomas, a spokesman with the Maryland Department of Public Safety and Correctional Services, the two men were stopped in a car along Highway 220 near the facility.

After searching the car, Maryland State Police recovered a quadcopter, synthetic marijuana (also known as “spice”), pornography, tobacco, a phone, a loaded handgun, and other materials. According to the Associated Press, the drone was a Yuneec Typhoon, which retails for around $1,300.

Revealed: the first hydrogen-powered battery that will charge your Apple iPhone for a week - Telegraph

A British technology company has claimed a major smartphone breakthrough by developing an iPhone that can go a week without recharging, running instead off a built-in hydrogen fuel cell.
Intelligent Energy has made a working iPhone 6 prototype containing both a rechargeable battery and its own patented technology, which creates electricity by combining hydrogen and oxygen, producing only small amounts of water and heat as waste.

Google now lets you see if your house is a good candidate for installing solar panels. Project Sunroof, a 20 percent project by Google engineering lead Carl Elkin, shows you how much solar power your roof could generate using Google Maps and the data it has about the surroundings of your home. This means it can take into account local weather, your roof’s orientation and how much shade falls on it from nearby trees and buildings.

Google is apparently testing a new feature in Maps for uploading food-related photos.
The feature, which is rolling out to local guides “level 3 and above” first, will apparently alert users when Maps has found a newly-captured photo taken at a food-related place on their device, and offer to attach that photo to a location for other users to see.

Apparently, this situation goes back to a German court judgment from 2013, which widened copyright law to include the applied arts too. As a result, the threshold for copyrightability was lowered considerably, with the practical consequence that it was easier for chefs to sue those who posted photographs of their creations without permission. The Die Welt article notes that this ban can apply even to manifestly unartistic piles of food dumped unceremoniously on a plate if a restaurant owner puts up a notice refusing permission for photos to be taken of its food.