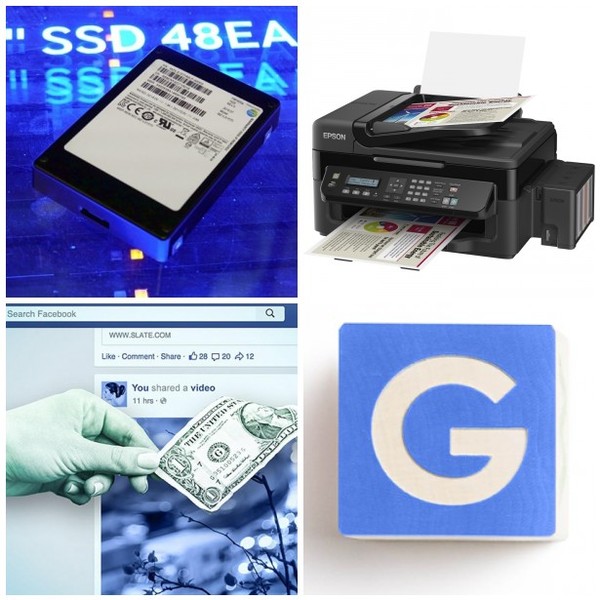 Lyle chats about doing the show for 15 years, and we cover the news: Freeboot followup, a new Epson printer that doesn’t need refills, Alphabet the new Google, Free Tuition for coding school, and much more.

Freebooting was discussed a few weeks ago during Arrr! Freebooters will Block your Tweets, Ladies

For Facebook, video is relatively new. But the company is touting some impressive stats. In its earnings call in April, Facebook executives said the platform was serving up four billion video views daily.
The problem, Green and others say, is in how Facebook defines “views.” A view, by Facebook’s measure, is anything longer than three seconds of an autoplayed video. That’s a pretty crazy metric when you consider the time it takes to scroll through your feed, see something moving, realize what’s happening, and decide whether to watch or move on.

Epson is trying to do its part to make things a little better with its new line of EcoTank printers — despite the ridiculous name, they have the smart idea of coming with huge tanks of ink that should last about two years before they need to be replaced. Epson claims that these printers have about the same capacity of 20 sets of ink cartridges; when the tanks run low, you can top them off with a bottle of ink.

While this initially sounds great, this printer’s claimed effectiveness is being met with some skepticism.

1) We no longer charge for tuition. Instead, we have placement fee of 18% of your first year’s salary. A $6,000 deposit pays for room and board, but it is subtracted from your 18% after you complete to program.
2) Our program has been extended to 14 weeks. This ensures that you are job ready, and has been shown to increase your first year salary by $30,000.

What is Alphabet? Alphabet is mostly a collection of companies. The largest of which, of course, is Google. This newer Google is a bit slimmed down, with the companies that are pretty far afield of our main Internet products contained in Alphabet instead. What do we mean by far afield? Good examples are our health efforts: Life Sciences (that works on the glucose-sensing contact lens), and Calico (focused on longevity). Fundamentally, we believe this allows us more management scale, as we can run things independently that aren’t very related. Alphabet is about businesses prospering through strong leaders and independence. In general, our model is to have a strong CEO who runs each business, with Sergey and me in service to them as needed. We will rigorously handle capital allocation and work to make sure each business is executing well. We’ll also make sure we have a great CEO for each business, and we’ll determine their compensation. In addition, with this new structure we plan to implement segment reporting for our Q4 results, where Google financials will be provided separately than those for the rest of Alphabet businesses as a whole.

Blast from the Past: Internet Cable in Santa Cruz

This 2006 episode of GeekSpeak discusses cable companies providing internet as an alternative to DSL and satellite internet.

Where Broadband is a Utility, 100Mbps Costs $40/mo

There’s been a lot of debate over whether the United States should treat Internet service as a utility. But there’s no question that Internet service is already a utility in Sandy, Oregon, a city of about 10,000 residents, where the government has been offering broadband for more than a decade.
“SandyNet” launched nearly 15 years ago with DSL and wireless service, and this summer it’s putting the final touches on a citywide upgrade to fiber. The upgrade was paid for with a $7.5 million revenue bond, which will be repaid by system revenues. Despite not being subsidized by taxpayer dollars, prices are still low: $40 a month for symmetrical 100Mbps service or $60 a month for 1Gbps. There are no contracts or data caps.

It's Time to Pick a Universal Messaging App

For most people, at least in the U.S., standard text messages are the default mode of communication. Your phone number is what you give out to love interests and potential employers; it’s the most universal identifier you have. That’s probably not going to change, and it doesn’t really need to. But SMS, as a technology, is terrible. It was made two decades ago as a bandwidth rounding error, a way to charge people to send data that the carriers could sneak through for free. It was pure profit. It’s also never really changed: You can still only send 160 characters, group texting is a mess, and sending pictures is awkward and unpredictable. Messaging is bigger than texting, and SMS can’t keep up.

At the Flash Memory Summit in California, Samsung has unveiled what appears to be the world’s largest hard drive—and somewhat surprisingly, it uses NAND flash chips rather than spinning platters. The rather boringly named PM1633a, which is being targeted at the enterprise market, manages to cram almost 16 terabytes into a 2.5-inch SSD package. By comparison, the largest conventional hard drives made by Seagate and Western Digital currently max out at 8 or 10TB.

Without fanfare, Apple recently updated iCloud.com to allow users to restore files, contacts, and/or calendars and reminders hosted on the service, opening up a recovery window for mistakes.

In 2012, researchers at Radboud University in the Netherlands discovered a security flaw in a common automotive security chip used in theft prevention by Volkswagen, Audi, Fiat, Honda, and Volvo vehicles. But after they disclosed their results to the auto manufacturers—a full nine months before they planned to publish them—the automakers sued to keep them quiet.

On our Adult Friends Reset Their Focus Virtually – May 30th 2015 episode of GeekSpeak we spoke about RFID signal boosting to allow access to a car, and how you can put your key FOB in a metallic enclosure. But this is worse. Because the system allowed unlimited attempts to authenticate, Verdult, Garcia, and Ege were able to recover the secret key within 196,607 tries with “negligible computational complexity.” It all took less than 30 minutes.