Multitasking Australians Thrown for a Hyperloop 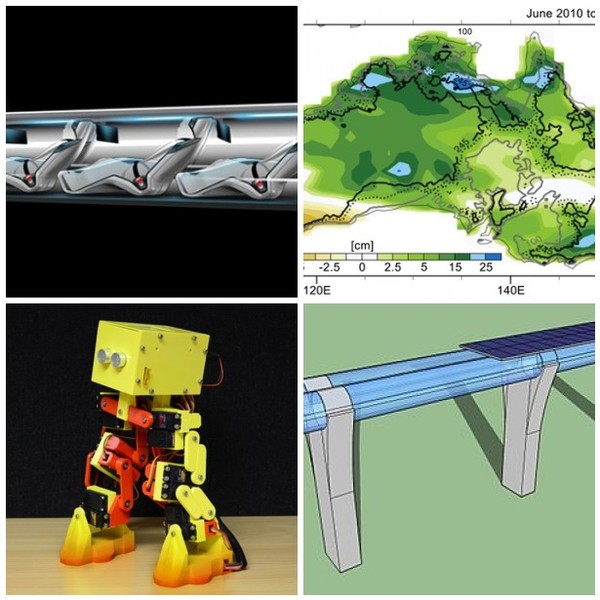 Discussion of Hyperloop and how it works, sea level dropped due to rain in Australia, Highschool 3D printers, and more with Bonnie, Lyle, and Guest Kelly O’Brien host of KUSP’s program Life in the Fast Lane

NASA/German Aerospace Center’s Gravity Recovery and Climate Experiment (GRACE) spacecraft detected much more mass for Australia in 2010 and 2011 – which was caused by a lot more precipitation.

Hyperloop episode of Life in the Fast Lane

Partially-evacuated subsurface tubes (down the middle of major arterials, like I-5, to obviate right of way issues). Capsules – pods – pneumatically suspended, magnetically accelerated and speed-maintained 28-passenger pods (14×2 seating, circa 4.5 feet wide and about 6 feet tall). Magnetic loops form a “linear” electric motor, (like a particle accelerator or a railgun) with “rotor” attached to the outer surface of the pods.

Each magloop is a few feet larger than individual pod diameter, accelerating and “flying” the pods at cruise speeds above 700 mph. Solar Panels run over the entire length of the route, linked to battery storage. With enough solar panels and batteries you could conceivably self power the system. Make the pods small enough to keep the total weight accelerated as small as possible. The CoD would be extremely low (as would be power consumption) thanks to the nearly-evacuated, extremely low pressure tube tunnel.

The vehicle consists of an on-board axial turbine compressor, a battery and the passenger compartment, which is pressurized for comfort. What air exists in the tube is drawn in through the nacelle at the front of the capsule and discharged underneath the vehicle. Coupled with pressurized air "ski’s along the surface of the pod, the vehicle would glide like an air hockey puck down the tube, speed gently maintained by timed electrical pulses in the magloops.

The trip from SF to LA or back: about 30 minutes.

Life in the Fast Lane Podcast

Kelly’s excellent program Life in the Fast Lane is available from NPR as a podcast.

Lyle shares his frustration with iOS’s lack of multi tasking.