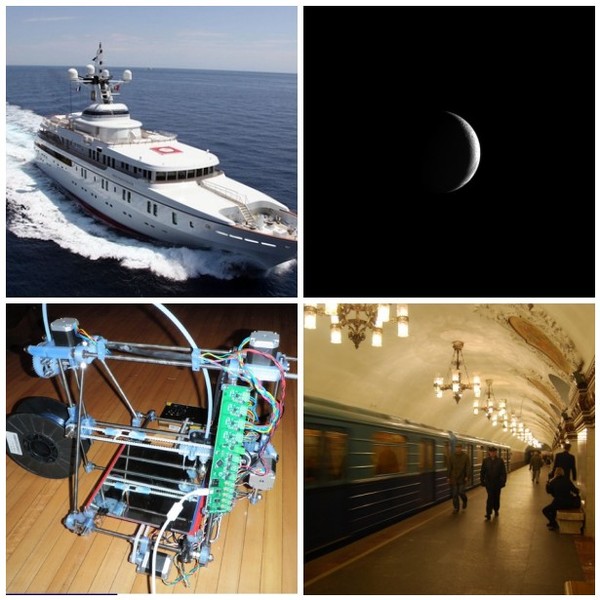 A group of students at the University of Texas at Austin built and successfully tested a GPS spoofing device to remotely redirect an $80 million yacht onto a different route, the Houston Chronicle reports. The project, which was completed with the permission of the yacht’s owners in the Mediterranean Sea this past June, is explained in the video below.

EVERY day for up to ten minutes near the London Stock Exchange, someone blocks signals from the global positioning system (GPS) network of satellites. Navigation systems in cars stop working and timestamps on trades made in financial institutions can be affected. The incidents are not a cyber-attack by a foreign power, though. The most likely culprit, according to Charles Curry, whose firm Chronos Technology covertly monitors such events, is a delivery driver dodging his bosses’ attempts to track him.

Lyle mentioned that GPS use to have a built in “difference in reality” that gave you some non-accuracy. And RDS was used to “fix” that intentional difference.

Diogo Mónica hacks together a bot to beat the other bots to make restaurant reservations.

Computer programs control a lot more then you think.

3D printers can pay for themselves in under a year

By simply printing out your own shower curtain rings, iPhone case, jewelry organizer or other common products, an average homeowner could recoup the cost of a 3D printer in under a year.

That’s the conclusion of a study by Michigan Technological University (MTU), which used “conservative” numbers to find that the average homeowner could save up to $2,000 a year by manufacturing just 20 common products.

The additive layer process of conventional 3D printers means they are usually limited to bottom up fabrication on three axes. The Mataerial printer managed to defy gravity by using a quick-solidifying print material, but now the LA-based NSTRMNT team led by Brian Harms, a Masters student at the Southern California Institute of Architecture, has created a 3D printing process called suspended disposition that gets around gravity by printing objects within a gel. Not only does this allow freeform additive fabrication on six axes, it also enables an “undo” function.

The liquid resin is suspended in the gel until it is cured by UV lightA peristaltic pump mounted on the 6-axes robot, which extrudes a light-cured liquid resinThe suspended deposition process uses a gelatinous medium as a support structure, rather t…Prints, like these tests, are cured with UV light within the gel.

The NSTRMNT 3D printer utilizes a six-axes robotic arm from Stäubli Robotics with a peristaltic pump mounted on it. This injects a light-cured liquid resin into a gel that acts as a support structure for the printed object. The pump’s flow rate is controlled by an Arduino, which is coordinated with the motion of the robot to create the prints. The Arduino also controls the pump’s flow direction, giving it the ability to delete parts of the printed object by sucking instead of extruding.

I love pictures of the crescent moon. There is something so wonderful about the shape, the elegance, even the geometry of it; knowing the you need a spherical world lit by the Sun from the side and seen from an angle to produce that lovely slender shape. Add to that an artistic shot done in black and white, and you get a photograph of great beauty.

One of the biggest surprises of the ongoing NASA Cassini mission at Saturn was the discovery of giant plumes of water vapor and ice particles blasting into the space from the surface of Enceladus, one of the planet’s 62 known moons.

Scientists wondered why the relatively diminutive moon, which measures about 310 miles (500 kilometers) in diameter, wasn’t frozen solid. They also began creating computer models to try to unravel the physics behind the stunning geological phenomenon.

Now, after analyzing 252 images of Enceladus’ plumes, scientists have part of the answer: Gravitational variations during the moon’s slightly eccentric, 1.37-day orbit around Saturn create tidal forces that directly impact how much material is shot into space from four fissures around the moon’s south pole.

Moscow Metro says new tracking system is to find stolen phones; no one believes them

Many outside experts, both in and outside Russia, though, believe that what local authorities are actually deploying is a “stingray,” or “IMSI catcher”—a device that can fool a phone and SIM into reading from a fake mobile phone tower. (IMSI, or an International Mobile Subscriber Identity number, is a 15-digit unique number that sits on every SIM card.) Such devices can be used as a simple way to see what phone numbers are being used in a given area or even to intercept the audio of voice calls.

Many people are stuck in the vicious cycle of late nights and late mornings. However, a new study reveals that a week of camping in the great outdoors may help people set their clocks straight.
A new study, published in the journal Current Biology, reveals that if given a chance, our body’s internal biological clocks will tightly synchronize to a natural, midsummer light-dark cycle.

A new partnership between Starbucks Corp. (NASDAQ: SBUX) and Google Inc. (NASDAQ: GOOG) hopes to improve the lives of freelance writers around the country. Starting in August, Google plans to make Internet speeds at all 7,000 Starbucks locations in the U.S. 10 times faster than the current AT&T-powered service. For cities equipped with Google Fiber, Google says the Internet speeds in Starbucks coffee shops could increase as much as 100 times.

For this project, Google is partnering with Level 3 Communications, which is based in Broomfield, Colo., and is one of the largest IP transit networks in the world. Google will first implement its technology at the Starbucks locations with the highest Wi-Fi usage, and it hopes to make it available at every location in 18 months.

The U.S. Patent and Trademark Office has rejected claims of an Apple patent that figures prominently in a patent infringement lawsuit against Samsung Electronics, according to documents filed by the South Korean company in a U.S. federal court.

The 21 claims of the patent were rejected by the USPTO in a “final office action,” as they were anticipated by previous patents or unpatentable. Known as the “pinch-to-zoom” patent, it covers the ability to distinguish between the scrolling movement of one finger and two-fingers gestures like pinch-to-zoom on a touch-screen to activate certain functions.

A group of three researchers have demonstrated how a malicious charger can be used to hack an iPhone or iPad in under 60 seconds.

On July 16, astronaut Luca Parmitano was doing an extravehicular activity—a spacewalk—outside the International Space Station when a spacesuit malfunction cut the EVA short. Somehow, water used to cool the suit leaked into his air ventilation system, causing his helmet to start filling with water.

Parmitano was brought back inside safely, and NASA engineers are still investigating what happened. Fellow crewmember Chris Cassidy made a short video describing the incident, showing us the helmet and what happened.