Pledge for Plastic Skulls, Frozen Phones, and Rovers in Distress 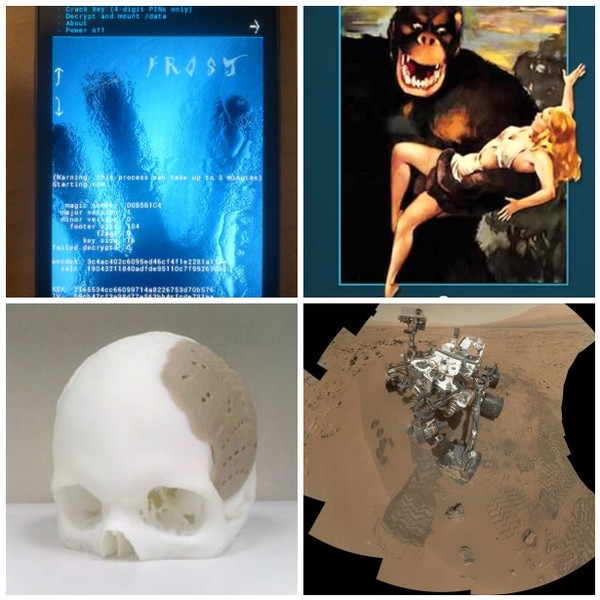 Curiosity software bug, 3D Printed Skulls, Compromising phones by freezing them, Sexism in Gaming, and your opportunity to support this, and many shows at KUSP.

A computer glitch on NASA’s Mars rover Curiosity has forced the robot to switch to a backup computer while engineers try to resolve the problem.

In the meantime, Curiosity’s science work is on hold, and the spacecraft is in a minimal-activity state known as “safe mode” while its backup computer is updated with the command codes and parameters it needs to take over the rover’s full operations.

Is This a Baby Picture of a Giant Planet?

Acquired by the European Southern Observatory’s Very Large Telescope (VLT), the infrared image above (right) shows a portion of the disk of gas and dust around the star HD100546, located 335 light-years away in the constellation Musca. By physically blocking out the light from the star itself by means of an opaque screen — seen along the left side of the image — the light from the protoplanetary disk around HD 100546 can be seen, revealing a large bright clump that’s thought to be a planet in the process of formation.

DRM (Digital Rights Management) is something that we often just have to put-up-with in software and digital media files. European courts have sometimes tried to protect our rights to do what we want with our purchases and defend us from heavy handed DRM and licensing practices but this restrictive software doesn’t seem to be going away. Imagine if other industries could use DRM to restrict your usage of the products you have bought, how ludicrous that might be?

To take part in a global design competition a team of designers decided to make piece of furniture that featured a usage restriction system akin to DRM. Below is a video of the DRM Chair. This chair was built to allow only eight uses before self destructing.

The newly developed CMOS sensor features pixels measuring 19 microns square in size, which is more than 7.5-times the surface area of the pixels on the CMOS sensor incorporated in Canon’s top-of-the-line EOS-1D X and other digital SLR cameras. In addition, the sensor’s pixels and readout circuitry employ new technologies that reduce noise, which tends to increase as pixel size increases. Thanks to these technologies, the sensor facilitates the shooting of clearly visible video images even in dimly lit environments with as little as 0.03 lux of illumination, or approximately the brightness of a crescent moon—a level of brightness in which it is difficult for the naked eye to perceive objects. When recording video of astral bodies, while an electron-multiplying CCD, which realizes approximately the same level of perception as the naked eye, can capture magnitude-6 stars, Canon’s newly developed CMOS sensor is capable of recording faint stars with a magnitude of 8.5 and above.

Violent video games make people violent. But so do pictures of snakes.

“For nearly thirty years we’ve been having this discussion, asking the question: do violent movies, music or video games make people violent? Well according to Brad Bushman and Craig Anderson of Iowa State University, yes. Based on the results of their research they concluded in 2001 that video games and violent media can make people aggressive and violent. Based upon their data and their conclusions, however, it’s safe to say that photos of snakes, crispy bacon, or a particularly rigorous game of chess can also make people aggressive and violent.

For all the vitriol on both sides of the debate, there’s a shocking lack of attention given to the research and scholarship of the last three decades. It’s a relatively small body of work, but despite its size some researchers – particularly North American researchers – have no problems with making broad, sweeping statements about their findings. Craig Anderson even likens the causal link between violent video games and violent behavior to the link between unprotected sex and HIV infection rates."