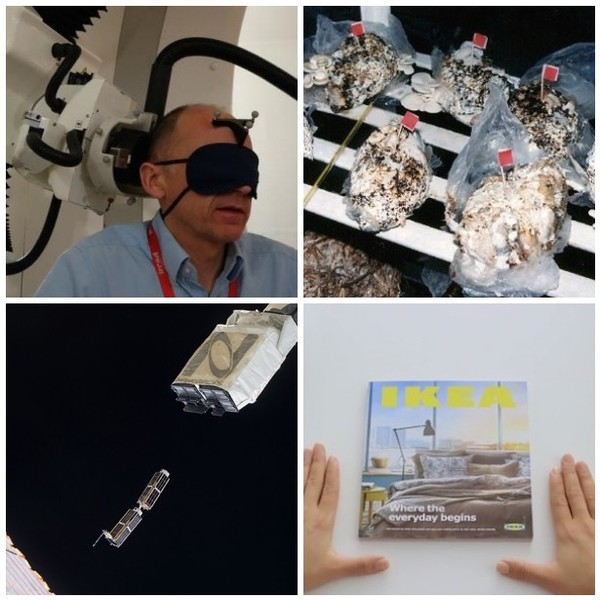 Currently Live – and adding and editing this show – refresh to get new content.

Diaper-grown mushrooms to cut down waste

While their contents might be considered an environmental hazard by many, disposable diapers themselves pose a more significant problem for the environment. According to the EPA, the average baby will work their way through 8,000 of them before they end up in landfill where they’ll take centuries to break down. In an effort to reduce the problem, scientists at Mexico’s Autonomous Metropolitan University, Azcapotzalco (UAM-A), have turned used diapers to the task of growing mushrooms.

“When it comes time to make a point about an important issue the tool I usually default to is humour, or satire, because I find it’s easiest to change people’s minds if you can make them laugh along with you. A lot of awful things have happened this week, and in the week before, and I’ve tried a few times to think of a clever way I could write them up while still getting the point across that, hey, things are really bad. I can’t. So here we are.”

Don’t try this at home!

A discussion about science, society, and the universe with Stephen Colbert, who is out of character, at the Kimberley Academy in Montclair, New Jersey, in January of 2010.

in which comedians make fun of that week’s internet nonsense for POINTS! Hosted by Chris Hardwick of the Nerdist network.

Paul F Tompkins hosts this short-form spoof on shoutfest commentary shows that airs on the Fusion network. The commentators are a cast of puppets made by The Jim Henson Company. Bonnie’s favorite is Yerdnerp, a hilariously-accented alien and immigration reform advocate; he protests, “Everyone should have the same chance at total world domination.”

“In ‘Hardcore History’ the very unconventional Dan Carlin takes his ‘Martian’, outside-the-box way of thinking and applies it to the past. Was Alexander the Great as bad a person as Adolf Hitler? What would Apaches with modern weapons be like? Will our modern civilization ever fall like civilizations from past eras? This is a difficult-to-classify show that has a rather sharp edge. It’s not for everyone. But the innovative style and approach has made ‘Dan Carlin’s Hardcore History’ a New Media hit.”

Not a podcast, but a TV show that originated as web videos on Funny or Die. Knowledgeable history buffs get shnockered and passionately describe a favorite moment of history. That would be amusing enough — but then folks you may recognie faithfully re-enact the story exactly as described by that week’s drunkard.

99% Invisible is a tiny radio show about design, architecture & the 99% invisible activity that shapes our world.

Judge John Hodgman – geeks & hipsters submit their beefs for Internet Justice. John Hodgman’s wide knowledge base, speedy wit, and genuine dedication to basic human decency make for some good ribbing of disputants while he draws out the information he needs to make truly considerate, reasoned judgments.

Radiolab is a show about curiosity. Where sound illuminates ideas, and the boundaries blur between science, philosophy, and hewmon experience.

Newfound Asteroid Will Give Earth Super-Close Shave on Sunday

Earth is about to have a close encounter with a house-sized asteroid on Sunday (Sept. 7), when a space rock discovered just days ago will zoom by our planet at a range closer than some satellites. But have no fear, NASA says the asteroid won’t hit Earth.

The asteroid 2014 RC will safely buzz Earth at 2:18 p.m. EDT (1818 GMT) on Sunday. At that time, the asteroid will pass over New Zealand and fly just inside the orbits of the geosynchronous communications and weather satellites orbiting Earth about 22,000 miles (36,000 kilometers) above the planet’s surface, according to a NASA statement. During its close pass, 2014 RC will be about 21,126 miles (34,000 km) from Earth’s surface.

Space Station's Cubesat Launcher has Mind of its Own

Station commander Steve Swanson was storing some blood samples in one of the station’s freezers Friday morning when he noticed that the doors on NanoRack’s cubesat deployer were open, said NASA mission commentator Pat Ryan.

Flight controllers at the Johnson Space Center in Houston determined that two CubeSats had been inadvertently released.

The Feynman Lectures on Physics

Why women have no time for Wikipedia

“Wikipedia is notorious for having a sizeable gender imbalance. As Guardian feature writer Anne Perkins put it – somewhat cattily – in a recent article, the site is dominated by ‘young white western males with a slight personality defect’. Most of them are single and childless. Indeed, as we shall shortly see, many are still children themselves.”

So, just from measuring the vibrations of an object seen in a video, scientists have been able to reproduce the songs and dialogue that caused the object the vibrate. Great video demo, part of a presentation at Siggraph this year

“Multiple banks say they are seeing evidence that Home Depot stores may be the source of a massive new batch of stolen credit and debit cards that went on sale this morning in the cybercrime underground. Home Depot says that it is working with banks and law enforcement agencies to investigate reports of suspicious activity.”

“An American academic is creating a searchable database of 12 million historical copyright-free images.”

Using a camera aimed at a plant or a candy wrapper, and noting any motion of that object, these folks reconstructed the sound that caused the object to vibrate — starting with their fancy high speed camera, but then applying the method to video captured by regular consumer cameras. They can make many kinds of objectsserve as visual microphones. Cool/creepy!

Good for restoring lost sound on film or video, I suppose….or spying on what was said behind closed windows. Even when intelligible speech can’t be recovered, they can still get info about the # & gender of people in the room…without recording any sound or pointing a camera at anyone in the room.