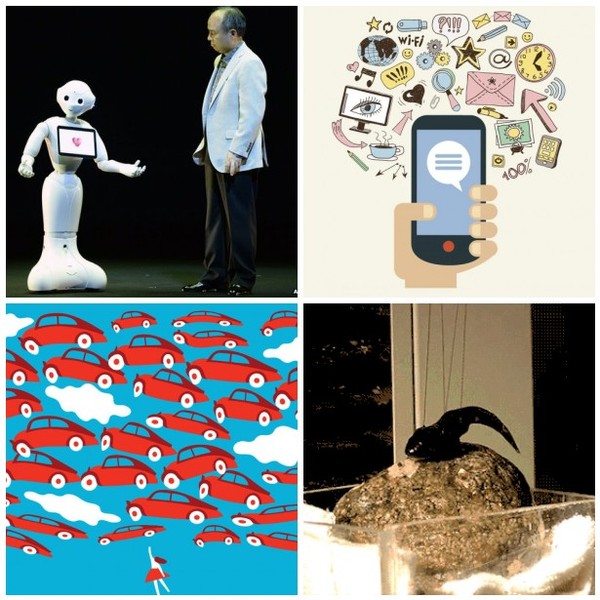 Martin, author of the Song of Fire and Ice, asks people to donate to two charities and he will add them to his next book as a character that will die.

A new ‘low price’ home robot helper is going on sale next year in Japan. The future is here, and it can understand your emotions?!?

Meet Product Hunt , a small experiment that is increasingly becoming the center of the conversations of product-oriented people working in tech. You can call it the Reddit of tech products, the Hacker News of product launches, but none of these descriptions really capture what Product Hunt is.

“It initially started with friends of mine and entrepreneurs in Silicon Valley,” Product Hunt founder Ryan Hoover told me in a phone interview. “We often talked about new products, usually saying ‘have you seen that new product that just launched?’ It’s water cooler topics in the Valley, but I couldn’t find a place online to discuss new products.”

Flying Cars: It’s our collective childhood dream that was promised allong side jet packs! Why don’t we have it yet?

There’s no need to learn AirType, it will learn you.
AirType learns the finger movements you make to get the letters that you want. It’s no different from typing on a keyboard.

A cover that creates a virtual space around your iPhone.

US Secret Service and Sarcasm

The Secret Service wants developers to make software that can detect sarcasm, which is totally doable.

Fab.com Is Probably Dead This Year

There hasn’t been a single piece of good news from Fab.com in a very long time. Layoffs, mismanagement, plummeting morale, and executive reshuffles have erased Fab’s early rep as a cheery decor startup with tons of money in the bank. Now, the bad can’t get much worse: we’re hearing Fab is already starting to shut down.

Zappos, based in Las Vegas, plans to hire at least 450 people this year, but candidates won’t find out about those jobs on LinkedIn.com, Monster.com or the company website. Instead, they will have to join a social network, called Zappos Insiders, where they will network with current employees and demonstrate their passion for the company—in some cases publicly—in hopes that recruiters will tap them when jobs come open.
bq. The retailer is attempting to fix a common problem, recruitment experts say: how to make the hiring process faster and easier by keeping a pool of willing and able candidates at the ready.
bq. For Zappos, which prides itself on a company culture where Tutu Tuesdays and Kilt Fridays are the norm, the standard hiring process is too “transactional,” said Michael Bailen, who heads talent acquisition for the company, a subsidiary of Amazon.com Inc. AMZN +1.89% since 2009.

With iOS 8 Notifications become interactive. They’re not just simple announcements—or even calls to action—anymore. They are actions in and of themselves. Entirely new windows onto our data. It’s nearly impossible to overstate how much this will change the way you use your phone.

Absurd Creature of the Week: This Fish Can Support 300 Times Its Weight With a Super Suction Cup stuck fast to reefs and sea cliffs the world over is a critter with a suction cup far more impressive than yours. This is the clingfish, which sports a belly sucker that can support a staggering 300 times the fish’s weight.

The 161 known species of clingfish vary greatly, from a tiny one that sticks itself to the individual spines of sea urchins, to a deep-sea type with hardly any sucker at all, to a relatively giant species the size of your forearm (no, not yours, Shaq—this doesn’t apply to you). Perhaps one of the best-studied species, thanks in part to fish biologist Adam Summers of the University of Washington, is the northern clingfish, which calls the Pacific coasts of Mexico, Canada, and the U.S. its home.